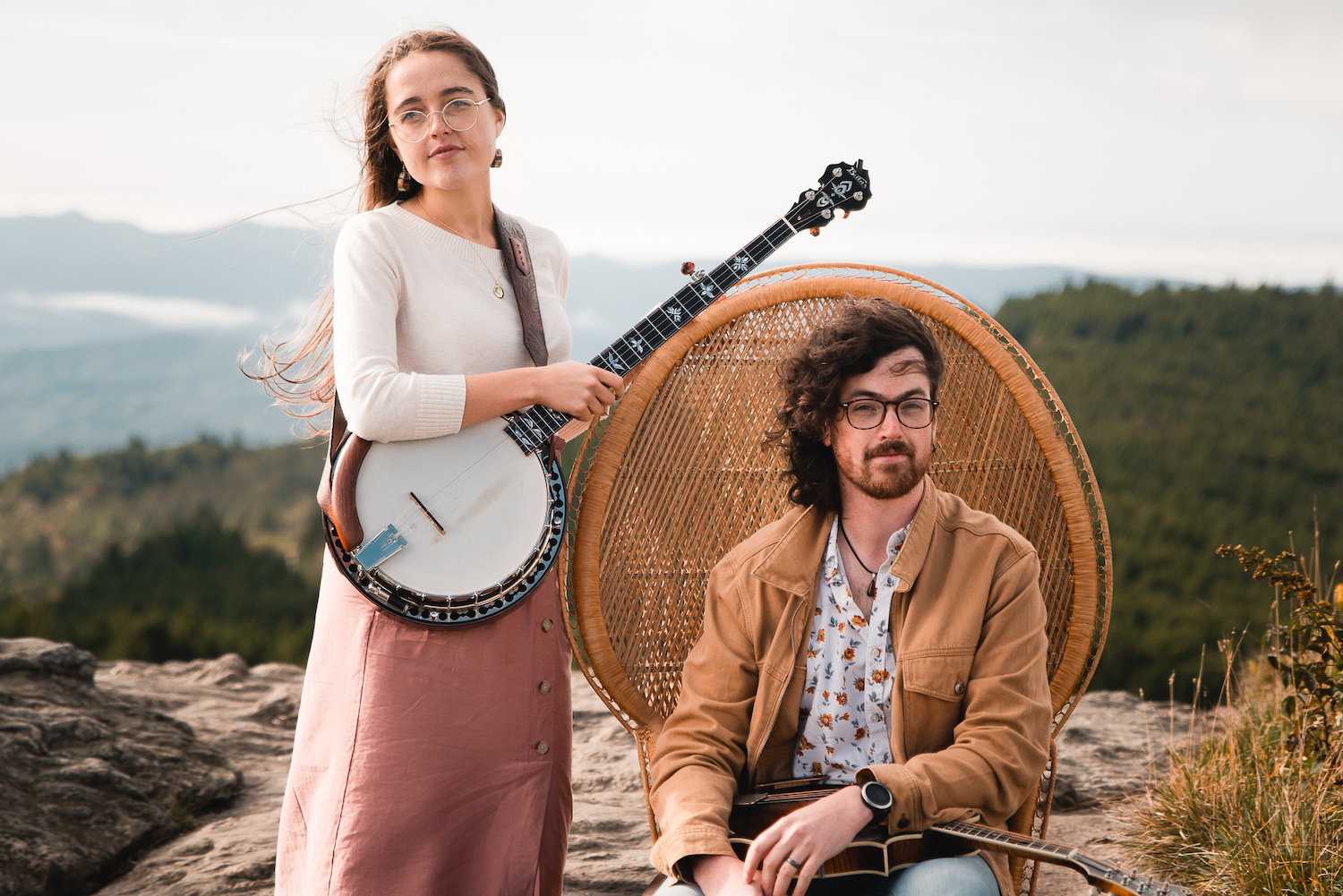 This line of the traditional song from which The Foreign Landers take their name captures something of what makes this Transatlantic folk duo’s story so compelling. Mandolinist David Benedict grew up in South Carolina while Tabitha Agnew Benedict started playing 5-string banjo at a young age in her  homeland of Northern Ireland. They spent their early years playing the same music, gazing at the same stars, yet still so far away from each other. But today Tabitha and David are carving their own path in the acoustic music world together, drawing on their unique international heritage to create something new. With the 2022 release of their album Travelers Rest, they share their own story in a way that is beautifully honest and moving. Although it is their story, listeners will find much that resonates within themselves—fears in the face of uncertainties and change, a commitment to cling to hope, and a longing for home/a familiar place to rest—all presented in a unique musical experience that sparks curiosity and joy, and showcases a love that unites across borders.

Their paths first crossed with a chance meeting at the 2017 IBMA Convention in Raleigh, NC. There was an immediate spark between the two upon realizing they had so many personal and musical similarities in spite of being from distant places. The result of this first encounter led to thousands of skymiles earned and culminated with an international wedding in 2019, when Tabitha and David tied the knot near Tabitha’s home in County Armagh, Northern Ireland.

In the retrospective words of award-winning mandolinist Sierra Hull, “Tabitha  and David simply sound like two people who are meant to make music together.” Yet it took a while for that to happen. Those lonely words from the old folk song above, still rang true, even after getting married. With touring commitments in different bands on opposite sides of the Atlantic, and green card red tape, Tabitha and David spent much of their first year of marriage apart, longing for the day when they could live in the same country and finally make music together. Making matters even more difficult, the known world changed at the horizon of a global pandemic. Facing immigration paperwork delays, canceled gigs, and unemployment, as well as general uncertainty about the future, the two isolated in place in Northern Ireland for 6 months at the beginning of 2020. However, the silver lining of their situation was that they were finally together with the time and space to start focusing on their own music.

With the resulting 6 track EP Put All Your Troubles Away (2021), The Foreign  Landers made their first appearance on the scene as a duo. The Hudson Valley Bluegrass Association described the EP as “…simply stunning.” Amidst the recording and release of this project, Tabitha’s green card finally arrived and the two relocated to the US. They found themselves drawn to and eventually settling down in a small town fittingly named Travelers Rest, SC, where the band has flourished—writing songs, recording at their home studio, and touring together. The results of these efforts are on display with their new record which is slated for release on November 12th, 2022.

Named after their new hometown, The Foreign Landers debut full-length album Travelers Rest is an artistic rendering of this personal story—moving across the Atlantic in the face of many challenges to find a place of their own. The record opens with the nostalgic track “Traveler,” a progressive bluegrass piece written from the perspective of Tabitha’s parents in Northern Ireland. “Waves” (track 2) and “We’ll Be Fine” (track 6) bring a sensitive Americana flavor to the album while still expressing the strong emotions of fear and confusion faced while awaiting Tabitha’s Green Card in the midst of the pandemic. Tabitha’s Ulster heritage shines through on the delightfully indecisive duet “Should I Go” (track 3), the exciting, modern Celtic instrumental medley “Johnny’s Peacock/The Red-Tailed Hawk” (track 4), and a bittersweet requiem for moving house in “Boxes” (track 7). However the two make a heavy nod to their bluegrass roots with “Flying Back to You” (track 5), a song about David’s misadventure flying across the Atlantic twice in one day to get back to Tabitha in Northern Ireland before international borders closed at the beginning of Covid-19, as well as a thoughtful reimagining of the Jimmy Martin bluegrass standard “Sunny Side of the  Mountain” (track 8). The album ends resolute with the quiet determination of “Garden” (track 9), an old time ode to planting seeds wherever you are, even in the midst of uncertainty, and “The Last Song” (track 10), a Lewis and Tolkien inspired, haunting duet that captures the universal, persistent hope that there’s a greater home somewhere beyond this life. Throughout this album, David and Tabitha’s musical story unfolds with the support of a host of talented guest musicians including: John Doyle, Brian Finnegan, Brittany Haas, Ethan Ballinger, and more.

Listening to this debut album will leave you convinced that The Foreign Landers were destined to be together and destined to leave their unique mark on the acoustic music scene. Their authenticity and originality in songwriting, tasteful multi-instrumental prowess, evocative vocals and unique transatlantic touch all combine together to create something inexpressibly foreign and yet strangely familiar. To quote Bluegrass Unlimited, “…be forewarned… The Foreign Landers have arrived. Listening to their music is like reuniting with an old friend. So, open up your door, welcome them in and put their music on. You will be glad you did.”

🍕🍺 Plan to come down and enjoy live music with a pizza and a beer (or two!)